June 24th was a big day for many Britons, Europeans and the rest of the world. The UK voted to leave the EU and many were left heartbroken, shocked and ashamed. Of course over half the country who voted leave were ecstatic, proud and amazed when they got their result, apart from maybe hearing the many lies which came out hours after the results were announced.

How I feel as a British expat in Spain

After spending many hours reading the news on June 24th, checking social media and talking to friends, I know that day will be remembered forever.  My Spanish friends were also shocked with the results and I hope their opinions on the UK as a country hasn’t completely changed for the worst.

Most of the people I know had voted to remain in the European union and it occurred to me that most of the older generation had just made a huge decision about our futures, and won.

I am still proud to be British, and I don’t hate my country. I still know that most of my family and the people I love are saddened to have left the EU and are praying for the transition to somehow not go through or for the petition for a 2nd vote to be possible. I am happily living my life here in Spain and have been for the last 2 years. I just hope that it could not affect me too much or stop me from living here with my boyfriend, my friends and having the job I want.

How will these results affect me?

For the moment, not at all. Of course things will happen very slowly (when they actually begin) and I don’t think its necessary to get overly stressed or panicked about it. Some of the main changes which could affect me include:

I can claim free health care here as I pay the social insurance, which you have to do when working in Spain.

2. Work permit/visa to work in EU.

I already have a job here but its possible that I could have to get a visa to continue in the future, which I hope wouldn’t be too much of a hassle.

It’s likely that if I work in Spain (or any other EU country) and earn unemployment wage, I won’t be able to transfer it to the UK, as I could do before. Vice versa, If I work in the UK It could be hard to then transfer the unemployment to Spain or another European country.

The same as the above goes for Pensions for the older generation. They won’t be able to use it in another EU country.

All of these regulations are pending and who knows what will be decided in the coming weeks.

On another note, I’ve seen plenty of British expats posting on social media in a shoutout for Spanish citizens looking for a marriage partner, I don’t think it will come to that, but you never know 😉

The only good thing for me living in Spain and travelling back to UK to visit friends and family is that my Euro is worth more now. Whereas for them visiting me their pounds are worth less 😦 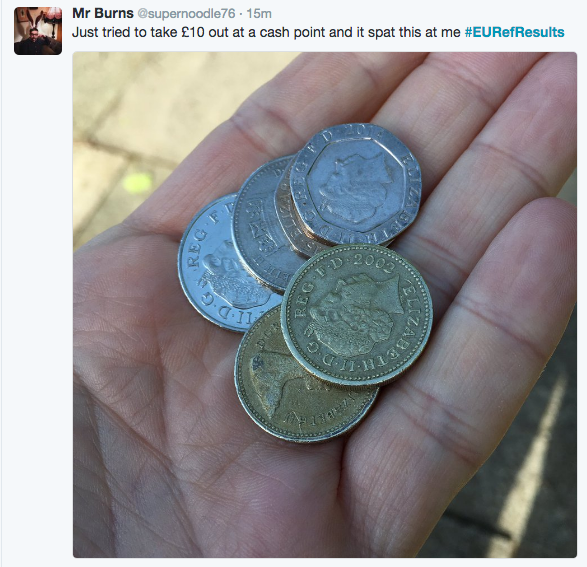 What can we do now?

Just get on with it. We’ve had one day of the country gone wild, twitter crashing due to the amount of emotional tweeters and the general shock which was spread across the nation. I just hope that the outcome of this is not all bad. We have to remember to stick together, I do not think its right for those who voted on opposite sides to begin to feel hatred towards one another, that is certainly NOT a way to go forward.

I’d personally love a 2nd chance to vote again as I feel many peoples votes were based on lies.

Even the leave voters were surprised it would actually happen and want to change their vote.

One thing that made me almost cry was reading that the biggest Google search in the UK on June 24th was actually ‘What is the EU?’ Sorry, YOU FUCKING WHAT?

I think it should be mandatory to go to an educational class and pass a test before being allowed to vote. We should all fully understand what our vote means, voting for something we don’t understand is worse than not voting at all.

So, keep your chin up, learn about what the Brexit really means and don’t spread hate, spread education and love! 🙂

8 thoughts on “A Brexit Expat in Spain”